“America is great because America is good. If America ever ceases to be good, it will cease to be great.” 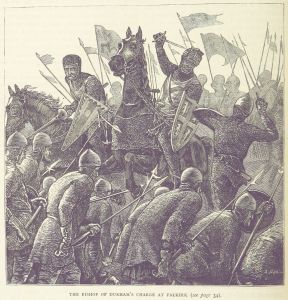 Why the Falkirk Center?
In the 1995 movie “Braveheart,” the battle of Falkirk is remembered as the heartbreaking defeat of William Wallace and his freedom fighters against the treachery of the Scottish establishment. It was indeed a loss for Scotland, but it was also the beginning of the end of King Edward and his ambitions for the nation. Wallace lost the battle—with many casualties—but he ignited the spark of freedom that ultimately won the war.

For the past few decades, conservatives have felt like we’ve been losing the battle. From Hollywood to academia, corporations to government, and special interest groups to the mainstream media, a growing and strident anti-Christian, anti-American sentiment has long dominated the most powerful institutions in America. Today, we must embolden a new generation of patriots to fight back with resilience. Like Wallace, we must uphold the banner for freedom and advance rather than retreat.

Bemoaning the rise of leftism is no longer enough. Although we do, as Jesus taught, turn the other cheek in our personal relationships, we cannot abdicate our responsibilities on the cultural battlefield. There is too much at stake in the clash for the soul of our nation. Bold, unapologetic engagement and initiative is needed on the part of every conservative American.

To take up this cause, Liberty University has launched the Falkirk Center for Faith and Liberty with the purpose of educating, inspiring, and mobilizing Christians in the battle to preserve American liberty and rally citizens in an effort to shape government policies, national institutions, and American society through a Biblical worldview.

Who is Falkirk for?

Rooted in compelling, enduring, absolute truths, our principles transcend generational divides and withstand cultural trends. As the creeds of secularism are proving tenuous and unsatisfying to millions of Americans, there has never been a better time to fill this void and amplify these truths.

Upcoming generations are falling victim to the teachings of secularism, primarily because they’re not learning America’s exceptional foundational ideals within the public education system. Further, attacks on religious freedom have caused them to abandon their Christian roots in droves. So, it’s no coincidence that as young people’s acceptance of traditional values declines, depression and anxiety are reaching record highs. Young people are hungry for fulfillment and truth like never before. And, right now, the only option for them is the siren song of secularism promoted by the far left.

The function and the moral mission of the Falkirk Center is to go on the offense in the name of Christian principles and in the name of exceptional, God-given American liberties.

Accomplishing this end requires more than adding noise to the echo chamber. It requires an army of bold ambassadors equipped with Biblical and Constitutional knowledge to speak truth to believers and unbelievers alike in every professional field and public forum. This includes Christian leaders and influencers—of all ages and backgrounds—defending, explaining, and sharing their beliefs on all platforms and sectors of society.

Thankfully, we don’t have to render ourselves powerless as the left misguides our young people. Much like Wallace’s struggle for freedom, we need brave, tenacious, passionate fighters to prevail in our war to save the greatest nation on earth. The Falkirk Center will remain on the front lines of this war. And we believe, like the passionate freedom fighters that courageously charged into the breach before us, we will eventually see victory.