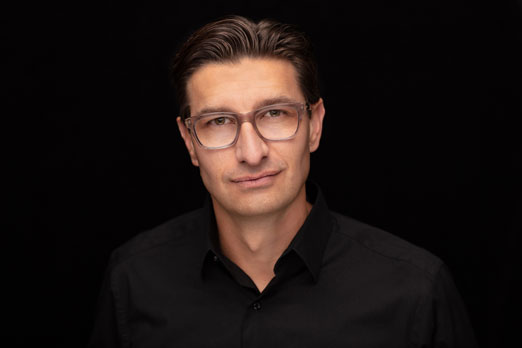 Jaco Booyens is a native of South Africa and an American citizen. Jaco is a proud Fellow of the Falkirk Center at Liberty University, through which he contributes to advance society through Christian views and content supporting the moral goals of Liberty University. He is a diversified entrepreneur and is involved in several entities and industries. Jaco has a vast entertainment background with over twenty-five years of experience stretching across continents and cultures within the industry leading him to start After Eden Pictures (a film production studio) where he serves as Founder and CEO.

As the oldest brother of a sister who is a sex trafficking survivor Jaco turned abolitionist and produced and directed the feature film 8 DAYS, which his wife wrote as a non-profit, volunteer film, inspired by actual events of sex trafficking within in the United States. Jaco launched red carpet events to screen the film, bring awareness and donate proceeds to local anti-trafficking organizations within the USA, South Africa, Europe and the Dominican Republic. Children have been rescued, brothels were shut down and Jaco became a trusted voice in the anti sex trafficking community and a voice to liberate women worldwide with over 20 year experience bringing awareness, influencing policy and fighting the crime. He has appeared on local, national and international Television and Radio shows including FOX Mark Levin (Life liberty &amp; Levin), Fox Business Lou Dobbs, Fox National and regional, OAN, CBS, The “Steve Harvey” Show, news articles, Podcast and live streams etc. Jaco actively fights against child sex trafficking in the USA and globally, giving aid and linking with agencies such as the TSA, FBI, Police departments, CIA, ICE and Homeland Security SRT, Foreign agencies and over 65 NGO’s is 56 countries around the world. Jaco is an international speaker and presenter on several humanitarian issues as well as serving on the non-profit boards of Traffick911 and SHAREtogether.

Jaco is a co-founder and BOD member of Eden Green Technology with the mission to feed the world and eradicate food deserts in the USA and abroad through a revolutionary vertical farming technology. Jaco is the founder of BC&amp;W Solutions a renewable US energy export company. Jaco has an educational background in Sports Medicine and had a professional athletic career in both South African Rugby and Canadian and American football.

Jaco’s mission is to promote life by transforming culture through uplifting entertainment. Believing many of society’s problems disappear when women are liberated, Jaco is currently published and working on two books book with his wife and sister entitled: “It Starts With Women.” and “SEX Nation” The book empowers women in the influence they have been given and commissions them to make a difference where they are at and in their callings as well as enlighten the reader in a deep dive into the dark world of child sex trafficking in the USA and the demand drivers to the crime. It also prepares the way for Jaco’s next Television and film projects with After Eden Pictures, which are focused on further promoting life, protecting children, empowering women, addressing societal issues and transforming culture.