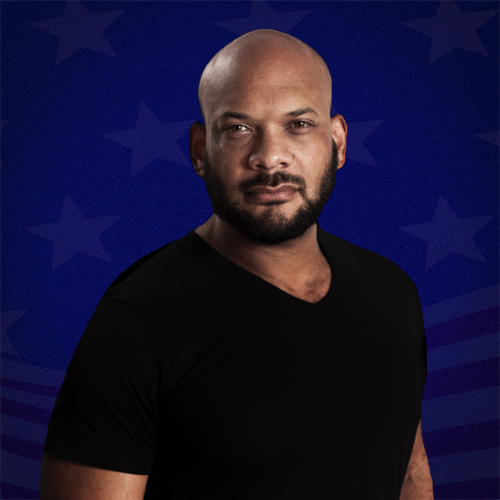 David Harris Jr. is an author, speaker, leader in the conservative movement and now a fellow for the Falkirk Center. He is the host of his own show at DavidHarrisJr.com and reaches over 50 million people a month. David has over 1 million followers across his social media channels. His book, “Why I Couldn’t Stay Silent,” breaks down some of the racial, political, and assumptive barriers that are currently front and center in our society. He has been featured on Fox Business, Fox and Friends, and The Glenn Beck Show. He has also been featured in articles published by Breitbart, the Epoch Times, and The Washington Post. President Trump has shared David’s videos on his Facebook, Twitter, and Instagram pages.

He is on the board for Black Voices For Trump and BLEXIT, a non-profit organization founded by Candace Owens, whose goal is to wake up the black community to the destruction of the Democrat policies on minority communities. He has spoken at most of the BLEXIT rally’s. He has been the keynote speaker at various political events around the country.

He is unapologetically pro-life and has a very personal reason to be so. Not only does he believe that his faith in God compels him to support life, but his bride shares a story of how her mother walked out of an abortion clinic, choosing to give life to her at the last minute. He has been married to his high-school sweetheart for 25 years, and together they have two pro-life daughters. Corbin, 23, and Skyler, 21.

Before David exploded onto the social media scene, he was a serial entrepreneur. David started his first company at 20 years old. Within two years, he was managing a multimillion-dollar company. He has founded several companies in the last 24 years. His current company is a health and wellness lifestyle brand that offers top of the line supplements to enable individuals to achieve more out of their daily lives. He and his wife still operate that business today.

He believes that limited government and personal responsibility are the foundation to attaining the American Dream. He’s on a mission to educate the next generation on the importance of these issues.