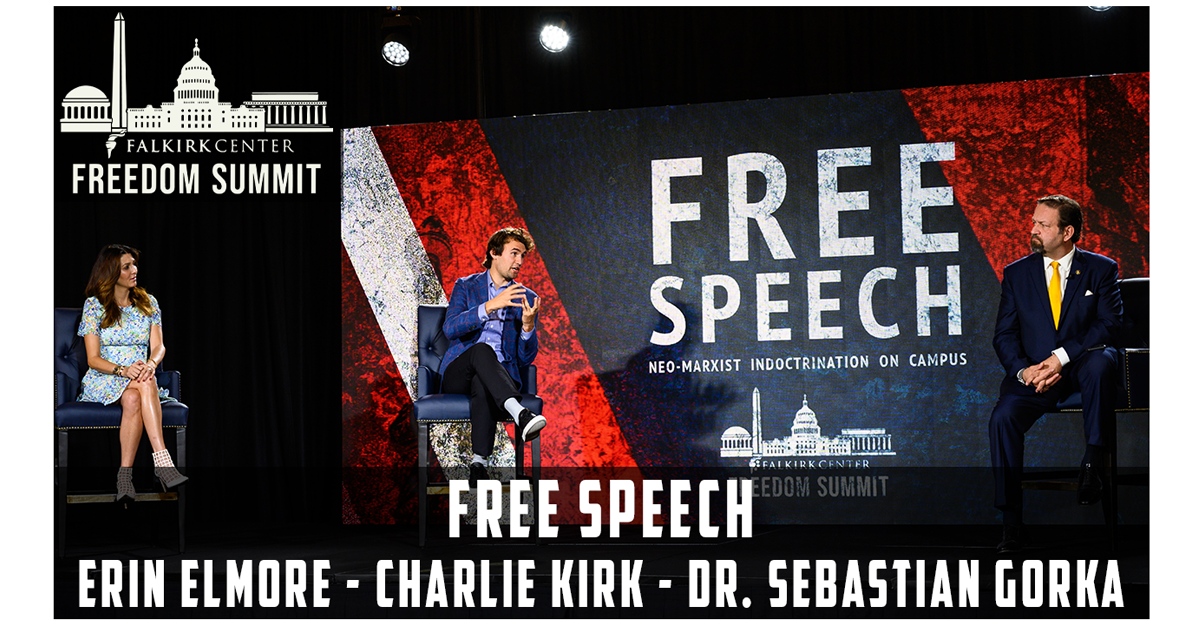 Executive Director for the Falkirk Center for Faith and Freedom, Ryan Helfenbein hosted a panel on free speech, or rather the concern about the lack thereof. On the panel were participants who would know better than most how free speech is being stifled in America, particularly on college campus.

The irony is just as fascinating as it is concerning. College is perhaps one of the most transformative experiences during one’s life and it takes place during malleable years of students’ personal development.

To distort what is supposed to be an objective, challenging, and developmental phase by encouraging censorship, violence, and whining is to completely reverse the purpose of higher education.

But it doesn’t stop in college. What students learn in college, especially behavior patterns, they will carry out into the world. If they are taught that censoring opinions is acceptable, let alone encouraged, then they’ll take censorship to the world and raise their children to push it. It hurts their personal performance in that they won’t be willing to listen to other ideas. It develops an unhealthy pride that can only result in counterproductive patterns of learning.

Charlie Kirk, founder and president of Turning Point USA and co-founder of the Falkirk Center, has experienced first-hand the idea of censorship on college campuses:

“I travel to college campuses so the rest of the country doesn’t have to. I’m one of the few conservatives ever to speak at Stanford, Berkeley, UCLA, and Brown in one year and survive to tell about it, and I can tell you that there’s a crisis happening on college campuses right now, the likes of which is being ignored by most of the media or not even reported at all.”[1]

Kirk’s concern for this crisis prompted him to partner with Liberty University in created the Falkirk Center for Faith and Liberty, a think tank that Kirk described as “a center that will be focused on the gospel of Jesus Christ and the first principles of the United States of America and the intersection between those two things and how important, or rather how harmonic they are.”[2]

Kirk’s hope is that the Falkirk Center can serve as an inspiration not just for students but also for the rest of the country to see the dire need for Christian participation in the public sphere.

Supplementing Kirks comments was the host of American First, Dr. Sebastian Gorka. Gorka pointed to current events around the country, specifically the riots in Portland, Oregon as tangible evidence for such bad behavior in the college atmosphere, specifically because many of the arrested rioters were teachers.

“We’ve seen violence across the states. In Portland alone we’ve had 50 police officers injured, 47 arrests and a disproportionate number of the arrests were who? It wasn’t well-to-do entitled white students – it was teachers…teachers, dozens of teachers. Hang on a second. We’re talking about people who are saying we need to dismantle the system that is the greatest experiment in democracy the world has ever seen.”[3]

“When the chair of the BLM chapter for New York state says ‘if we don’t get what we want we will burn the system down…if you look at the website for Black Lives Matter they say one of the things that they target is the traditional nuclear family, which already has been destroyed in the black community…and when the founders of BLM on video state not only that they are Marxists but that they are trained Marxists…this isn’t hyperbole. This isn’t some crazy idea like an Info Wars fringe element on the right. This is in their own words and this is what’s happening in America today.”[4]

Erin Elmore, president of USA Strong, elaborated on the concern for school distortion by mentioning that this distortion of thought development is not just happening in high education but has made its way into our younger student’s academics as well.

“The concern and the reality even a year ago is that this is only happening on college campuses and the realization is that now it is trickling down to kids as young as pre-k. And if you start at that level the college board on a high school level is also in bed with these Confucius institutes.”[1]

To the idea of infiltrating the school system, Elmore argued that indoctrinating methods can be done stealthily under the guise of education.

“It’s not about teaching out kids Mandarin, it’s about propaganda, indoctrination, spying intellectual property…it should be a terrifying reality and our elected officials need to speak up on this.”[2]

UP NEXT
Weaponized Investing with Biblical Principles