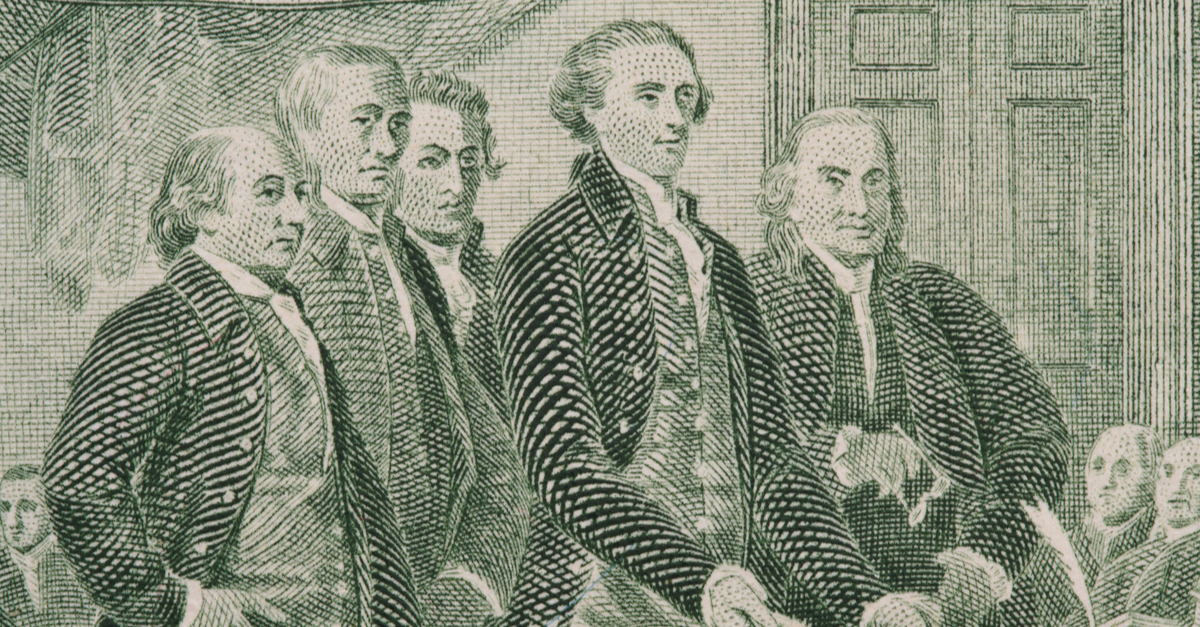 When our Founding Fathers built the philosophical framework for what would become this great nation of ours, it was based on several major presuppositions that have since been dismantled by the anarchistic wasteland of postmodern philosophy and critical theory.

One of these presuppositions was that there is a common, objective definition of right and wrong.

And where did the framers derive this definition? Why, the Bible of course.

What the Founders regarded as truth is now taken for granted as outdated by many mainstream thought leaders of our time.

The Founding Fathers, who very plainly stated that our natural rights are given to us by God and that the documents they crafted to govern our nation were designed to protect these rights, assumed the nation would always consist of people who believed in the basic morality rooted in the Bible.

“By renouncing the Bible, philosophers swing from their moorings upon all moral Subjects. … It is the only correct map of the human heart that ever has been published.  It contains a faithful representation of all its follies, Vices & Crimes,” Dr. Benjamin Rush, social reformer and signer of the Declaration of Independence once wrote to his friend John Adams, as accounted by historian Daniel L. Dreisbach,

Rush concluded, in the same letter, that “All Systems of Religion, morals, and Government not founded upon it, must perish, and how consoling the tho(ugh)t! — it will not only survive the wreck of those Systems, but the World itself.  ‘The Gates of Hell shall not prevail against it (Matt. 16:18).’”

“The Bible,” Adams replied, “contains the most profound Philosophy, the most perfect Morality, and the most refined Policy, that ever was conceived upon Earth.  It is the most Republican Book in the World, and therefore I will still revere it. … (W)ithout national Morality,” he continued, “a Republican Government cannot be maintained.”

Although, as any cursory examination of the early history of our nation will show you, the colonies and later states were populated by Christians of all stripes and non-Christians alike, the common moral objections of the founding documents were both universal and crucial to the framers’ vision.

As Dreisbach explains, “Although they held a wide range of views about Jesus, salvation, and even the Bible’s divine origins, the founding generation looked to the Bible for insights into human nature, civic virtue, social order, political authority and other concepts essential to the establishment of a new political society.  Many saw in Scripture political and legal models – such as republicanism, separation of powers, and due process of law – that they believed enjoyed divine favor and were worthy of emulation in their polities.”

This was more or less true in our nation until the last century when public regard for the basic, agreed-upon morals of Judeo-Christian principles began to decay.

Considering the dire predictions Adams had to the future of a nation that did not rely upon the Bible’s sacred morals, it’s amazing that we’ve made it this far with such a decreased respect of the Bible.

As radical groups promote the dismantling of our political systems and the defunding of law enforcement,

as schools preach subjective morality and even the non-existence of truth, as the most basic sexual morals are decried as discriminatory,

as sins of all kinds are glorified by culture,

as the right to life is violated daily,

as free speech is demonized,

as the rule of law is seen as oppressive,

and as even the most basic history of our nation is deemed evil by those with no sense of objective right and wrong,

the fabric of our nation is falling apart at the seams.

All because we have cast aside the most basic principles the United States was founded on.

Our nation was birthed with a distinct reliance on both God’s providence and his righteousness. It’s time we start relying on both again.