Home ›Life & Culture›Christians Should Always Be Louder About Sexual Impropriety Than The #MeToo Movement. Here’s Why.

Christians Should Always Be Louder About Sexual Impropriety Than The #MeToo Movement. Here’s Why. 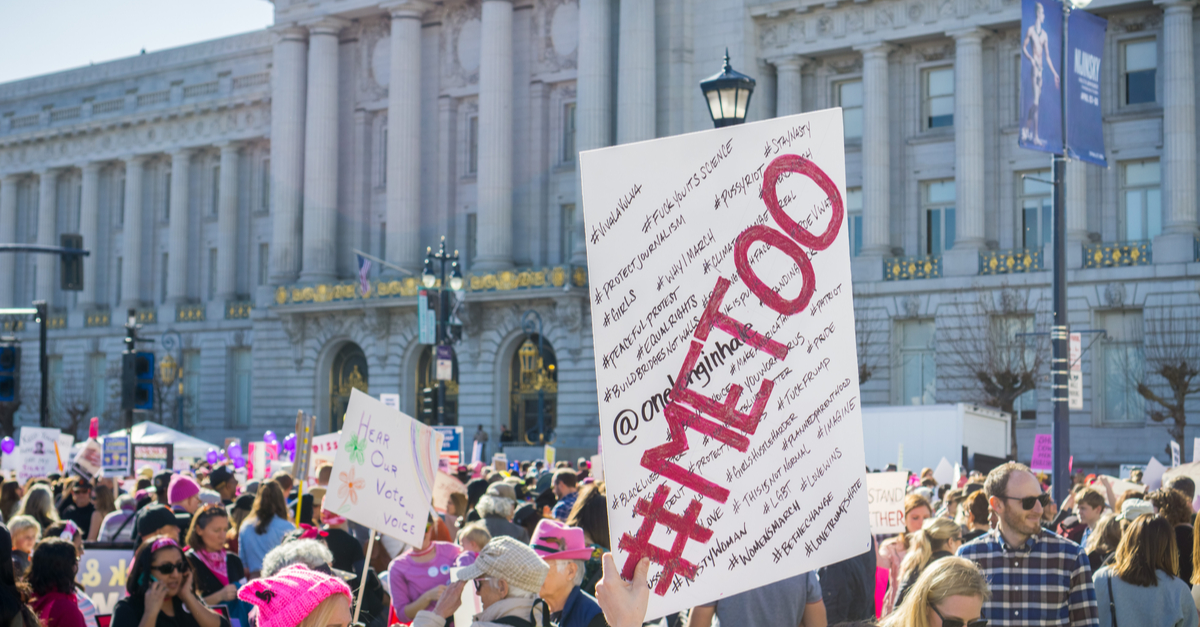 Another day, another sexual assault allegation that is testing the moral consistency of the #MeToo Left.

Democratic presidential nominee, Joe Biden, has developed a reputation over the years for his very loose definition of personal boundaries. Biden has now been accused by former staffer Tara Reade for sexual assault.

Naturally, many of the loudest voices from the recent #MeToo movement have suddenly changed their tune when it comes to the admonishment to “believe all women.”

Of course, when politicians are accused of sexual impropriety or flat-out assault, it can be disheartening to see how strictly their critics and defenders respectively fall along party lines. The Left has become notorious for selectively choosing when to apply outrage and when to apply common sense calls for the presumption of innocence.

No matter how you align politically, your standard of sexual morality should always be consistent and rooted in objective truth. Christians, more than anyone else, should be the voices for this truth.

While the #MeToo movement considers sexual impropriety to be anything done to a woman that is against her will, the fact of the matter is, if Harvey Weinstein’s or Matt Lauer’s or Joe Biden’s victims had consented to their sexual advances, it still would have been wrong.

Sin is sin, even if it’s not a sin as heinous as rape. And if we return to the strict definition of sexual sin laid out in God’s law, we will see society be able to judge such cases more fairly.

If you’re a Bible-believing Christian, sexual immorality should have a clear definition to you. And no matter how often the goalposts for sexual immorality are moved politically, we should always maintain a biblical perspective of what it really means since we follow a God who gives us the only trustworthy definition of truth.

Sexual acts that take place outside of the sacred bonds of marriage are all sinful, most particularly when they occur by force or coercion. There is no reason we shouldn’t always denounce all sexual immorality. This doesn’t mean we can’t advocate for due process, but it does mean we should be mindful not to dismiss the definition of sexual sin while doing so.

We’re more than happy to denounce Joe Biden’s perceived sexual sin, particularly because his former staffer, Tara Reade, seems to have a legally credible account, unlike the allegations made against Brett Kavanaugh in 2018.

Far too often, those on the Right are far more forgiving in the case of a likely consensual arrangement that was later painted as an assault by a regretful woman, as so often happens on college campuses or during casual hookups.

An account shared in the peak of the #MeToo movement by a young anonymous woman called “Grace” who went on a date with comedian Aziz Ansari is a good example of the tendency of young women to consider encounters they regret as somehow in the realm of assault.

As Vox reported at the time:

Grace told Babe that Ansari repeatedly ignored her growing discomfort and the concern she voiced and tried to pressure her into sex. At one point, Grace told Babe that she voiced that she didn’t “want to feel forced.” Grace said that Ansari seemed to understand, until he suggested they “chill on the couch,” where he “sat back and pointed to his penis and motioned for me to go down on him.” Grace says she felt pressured to go along with it, not knowing how to extricate herself from the situation, and eventually left his apartment in tears.

Ansari released a statement on January 14 in which he said they “engag[ed] in sexual activity, which by all indications was completely consensual,” but that when he “heard that it was not the case for her, I was surprised and concerned.”

It is very important to make sure that no man is wrongly accused of rape. Sexual assault is one of the most heinous crimes one can commit against another human being and we should make sure never to treat it lightly.

But consensual extramarital sex is still always a sin, whether it is reluctantly or emphatically consented to by both parties. And in the process of forgiving men who haven’t actually committed rape, we should still be mindful to keep the goalposts where God placed them.

Too often, conservatives who claim to adhere to Christian ideals seem to take sexual impropriety too lightly if the woman may have consented.

There are many gray areas in our modern, secular definition of sexual rights and wrongs, but there are no gray areas in God’s law.

There was a time, not too long ago, when these laws kept many more women, and men, safe within the commonly expected social expectations for men and women.

Remember, before the #MeToo movement was a thing, Mike Pence was mocked for the very strict rules he applied to interact with women other than his wife. But he was clearly on to something, as far too many men who were too casual or familiar with female co-workers (or flat-out engaged in an extramarital affair with a woman) as we have since discovered.

As author and commentator Heather Mac Donald wrote in her book, “The Diversity Delusion,” social expectations prior to the sexual revolution were, by default, that one (especially women) waited until marriage for sex.

“Let us recall the norms that the sexual revolution contemptuously swept away in the 1960s. Males and females were assumed on average to have different needs regarding sex: The omnivorous male sex drive would leap at all available targets, whereas females were more selective, associating sex with love and commitment. The male was expected to channel his desire for sex through the rituals of courtship and a proposal of marriage,” Mac Donald wrote.

“The default setting for premarital sex was ‘no,’ at least for females. Girls could opt out of that default—and many did. But placing the default at ‘no’ meant that a female didn’t have to justify her decision not to have sex with particular reasons each time a male importuned her; individual sexual restraint was backed up by collective values. On campuses, administrators enforced these norms through visitation rules designed to prevent student couplings,” Mac Donald said.

Feminists were actually right to challenge this double standard, but instead of insisting that we apply the same expectations upon men as were applied to women, they advocated for everyone to indulge in their sexual sin.

And here we are today.

“The default for premarital sex was now ‘yes’ rather than ‘no’; opting out of that default required an individualized explanation that could no longer rely on the fact that such things are simply not done,” Mac Donald said.

No matter who is being accused of sexual assault or impropriety, the default for Christians in non-negotiable. Let’s encourage young women to stick to their default, and for their default to be a strong, resounding “no” to anyone but their husbands. Likewise, let’s encourage young men to presume the default is “no” until they’re willing to be a husband and be faithful to one woman.

Sex outside of marriage is a sin. And the more that our society addresses the issue of sexual sin, the more loudly godly Christians should declare what the real definition of such a sin is.