Home ›Religious Liberty›Christ, Cardinals, and Courage: What a little bird can teach us about biblical manhood

Christ, Cardinals, and Courage: What a little bird can teach us about biblical manhood 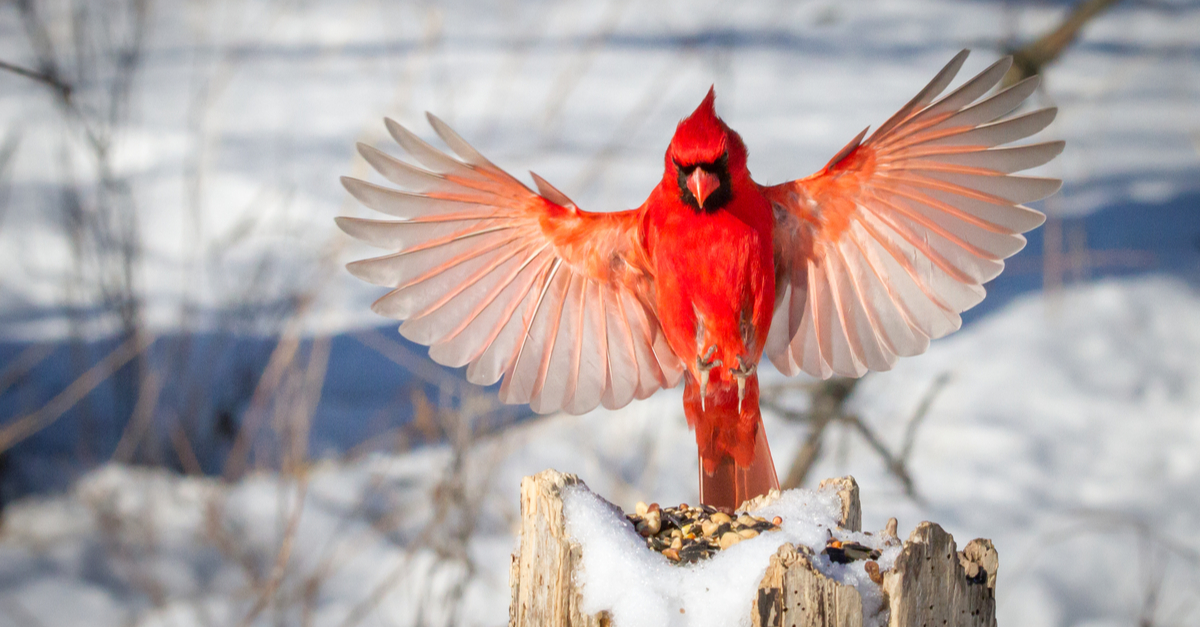 Lynchburg, Virginia, home to Liberty University, is a picturesque city nestled in the tree-covered foothills of the Blue Ridge mountains. One of the best features of Lynchburg is its trail system that runs along the James River. Recently I was walking on one of these trails when I heard an abnormal amount of chatter from nearby birds. A female cardinal flew across the path in front of me and disappeared into thick undergrowth. I could hear her babies chirping loudly.

Following close behind her was a male cardinal who perched himself on the outside of the dense foliage. His vivid red feathers were easy to spot against the dull green background. He stood guard, his legs braced, his head darting back and forth alertly. As I drew closer, I kept my eyes on him and hoped to get a passing glance at the babies inside. Soon his attention was fully on me, his gaze intensely locked on to this potential threat.

When I got within about ten feet, he suddenly launched off his perch and flew directly at me! I jumped to the side and he flew back across the trail but remained close by. He had flown no farther than about two feet from me. It seemed clear to me, though I am no ornithologist, that he was not primarily trying to intimidate me but to distract me, to turn my focus on him and get me away from his family. The bravery of this tiny bird who could not weigh more than a few ounces was incredible to witness. That cardinal had no hope of winning a fight with me if I was actually a predator, but he was guarding what was precious to him and was willing to make a great sacrifice for it. The encounter was rife with symbolism that was not lost on me. It was a perfect illustration of biblical manhood.

It is not necessary for me to relay the litany of depressing statistics such as the percentage of fatherless homes in Western culture; these statistics are now common knowledge. The question is, what can be done about them? Scripture says in Ephesians 5:25-30:

“Husbands love your wives, just as Christ loved the church and gave Himself up for her, so that He might sanctify her, having cleansed her by the washing of water with the word, that He might present to Himself the church in all her glory, having no spot or wrinkle or any such thing; but that she would be holy and blameless. So husbands ought also to love their own wives as their own bodies. He who loves his own wife loves himself; for no one ever hated his own flesh but nourishes and cherishes it, just as Christ also does the church, because we are members of His body.”

In regard to children, Paul writes a few verses later in Ephesians 6:4, “Fathers, do not provoke your children to anger, but bring them up in the discipline and instruction of the Lord.”

The biblical depiction of manhood isn’t found in being able to fight through waves of attackers like an action star; it’s found in the self-sacrificing love of Christ. It’s found in the picture of Almighty God coming to Earth as a baby, living the humblest of lives, and purposely subjecting Himself to torture and death at the hands of His own creation. The Son of God endured the wrath of God that we deserved, and for what? To save and redeem His bride, the church, and to wash her filthy sins as white as snow.

In the book of Hosea, God tells the prophet to marry an unfaithful woman named Gomer, a prostitute, to illustrate Israel’s unfaithfulness to Himself. Hosea married Gomer and they had a family, but Gomer continued on in her unfaithful and sinful lifestyle. Hosea had to buy his own wife and redeem her out of prostitution. That story was about Israel, not the church, but the parallels are great. Despite God’s great faithfulness and love, Israel pursued sin and other gods relentlessly which led to their captivity. Christ took us, as sinful and unfaithful as Gomer, who spurned His love, and died to set us free. C.S. Lewis described Christ’s love this way:

“God, who needs nothing, loves into existence wholly superfluous creatures in order that He may love and perfect them. He creates the universe, already foreseeing-or should we say “seeing”? there are no tenses in God-the buzzing cloud of flies about the cross, the flayed back pressed against the uneven stake, the nails driven through the mesial nerves, the repeated torture of back and arms as it is time after time, for breath’s sake, hitched up. If I may dare the biological image, God is a “host” who deliberately creates His own parasites; causes us to be that we may exploit and “take advantage of” Him. Herein is love. This is the diagram of Love Himself, the inventor of all loves.”

That’s the type of love Paul was talking about in Ephesians chapter five. To be a godly man you don’t have to be the strongest or the biggest guy on the block. That cardinal certainly wasn’t. You don’t have to be able to fight off a giant walking towards your family, but you have to be willing to step in front of it and lay yourself down. To be a godly man one must attempt to emulate Christ; His love, His courage, His meekness, and His selflessness. When you are tempted to throw in the towel, to give in to selfishness or compromise your integrity, just remember your Savior on the tree and that little cardinal.